For years, the boy-king Tutankhamun has been an object of fascination worldwide, not only for his mysterious demise… but the even stranger deaths of those who discovered his tomb… and the legend that followed, the legend of the pharaoh’s curse. Could there actually be some element of truth to that legendary curse? An international team of scientists is investigating the mystery using state of the art technology to find out what really happened. It’s a high-tech exploration of the most celebrated mummies ever–and their tombs–to reveal the truths about this famed curse and a series of puzzling deaths that cross the centuries. 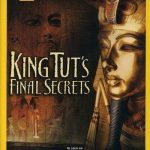