Eyewitness to the 20th Century

Using photographs, maps, charts, and time lines, this comprehensive volume portrays this century’s incredible events and developments from the Wright Brothers’ first flight to Neil Armstrong’s walk on the moon, up to the events of today. Organized conveniently by decade, each section begins by highlighting a prevailing issue of the day—America and Big Business, Women’s Suffrage, the 1924 Immigrations Restriction Act, the Great Depression, the Atomic Age, McCarthyism, Civil Rights, the Explosion of Mass Culture, the Rise of Conservatism, and the End of the Cold War. The 20th century brought forth the most dramatic advances ever made in a single century. No one tells it better than National Geographic Society. 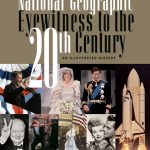 Eyewitness to the 20th Century