Citizens of the Sea

Citizens of the Sea: Wondrous Creatures From The Census of Marine Life

National Geographic underwater photographers and the Census of Marine Life capture the astonishing diversity and the most intriguing organisms in the ocean in this riveting book, by marine scientist Nancy Knowlton.  As you read lively vignettes about sea creatures’ names, defenses, migration, mating habits, and more, you’ll be amazed at wonders like . . . · The almost inconceivable number of creatures in the marine world. From the bounty of microbes in one drop of seawater, we can calculate that there are more individuals in the oceans than stars in the universe. · The sophisticated sensory abilities that help these animals survive. For many, the standard five senses are just not enough. · The incredible distances that seabirds and other species cover. Some will feed in both Arctic and Antarctic waters within a single year. · The odd relationships common in the marine world. From a dental hygienist for fish to a walrus’s one-night stand, you’ll find beauty, practicality, and plenty of eccentricity in sea-life socialization. Brilliantly photographed and written in an easygoing style, Citizens of the Sea will inform and enchant you with close-up documentation of the fascinating facts of life in the ocean realm.

Be the first to review “Citizens of the Sea” Cancel reply 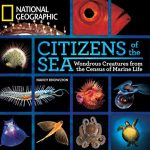 Citizens of the Sea