The National Geographic Society chose the June 1896 issue of the Magazine to reveal its new Society seal, and prominently displayed it on the cover. This graphic had been adopted as the official corporate seal on April 17 of that year when the following amendment was made to the bylaws:

Article IX. Seal. The seal of the Society shall consist of a polyconic projection of the western hemisphere, from o degrees to 180 degrees west from Greenwich, which the legend ‘National Geographic Society’ above and ‘Incorporated A.D. 1888’ below, as in the design herewith.

This design had been executed under the personal supervision of then Society President Gardiner Greene Hubbard, and is still the seal in use today.

Coin was minted in 2006 by Design Masters.

Be the first to review “Brass Commemorative Coin” Cancel reply 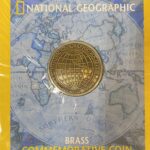