Abraham Lincoln’s Extraordinary Era: The Man And His Times

This handsomely illustrated volume commemorates Abraham Lincoln’s 200th birthday and gives rare insight into the President who shook the world—and whose words and example endure today in nations from Siberia to Mexico to Pakistan. This is the official book of the Abraham Lincoln Presidential Library and Museum (ALPLM) in Springfield, Illinois that has welcomed more than one million visitors since its 2005 opening.

Using the exhibition halls as a launching point, this book offers stories, anecdotes, and never-before-seen images and artifacts from the museum’s vault. It positions Lincoln as a man of his century, a time ripe with Industrial Revolution, travel and culture, abolition, and war. Worldwide events figure into the story: Britain’s emergence as a democracy, Russia’s freeing of the serfs, Japan’s opening to foreign trade, Germany’s unity under Bismarck.

Every page reflects the humor, integrity, and unique style of leadership that made Abe Lincoln a legend. Quote boxes reveal his sayings; cartoons give a glimpse of him from domestic and foreign shores; sidebars highlight archaeological discoveries, such as the store where young Lincoln held his first job. Personal incidents tell of his special relationship with son Willy; his love for his wife; and the reverence he has inspired in such luminaries as Tolstoy, Gandhi, and Thatcher. With multiple promotional venues and copies displayed in both the Lincoln Store and the new store at Gettysburg, this book will become a centerpiece for state and national Lincoln Bicentennial celebrations. 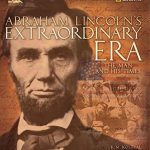