A Place of Remembrance

A Place of Remembrance: Official Book of The National September 11 Memorial

The official book created by the National September 11 Memorial & Museum, this keepsake volume honors those lost-and celebrates the spirit of hope as it tells the story of rescue, recovery, and the building of the memorial plaza (opened on September 11, 2011), and the museum (opened on May 21, 2014). â€  Newly updated, this is the one and only official companion book to the memorial plaza, created by the 9/11 Memorial Museum staff and originally published for its opening on the tenth anniversary of the World Trade Center attack. In somber words and chilling photographs-some never before published-the book tells the story of the World Trade Center buildings; the earthshaking attack; the aftermath, as anxious rescue efforts became months-long recovery; the public debate over how to commemorate those lost; the plans finally approved for a plaza and museum. This edition contains a chapter dedicated to the remarkable nine-story underground 9/11 Memorial Museum, full of interactive exhibits that honor the meaning of 9/11 and the nation’s response to the disaster. Illustrations and text come from the 9/11 Memorial Museum’s collection, including its extensive oral history transcripts. Poignant and inspiring, this important book will win readers’ minds-and hearts.

Be the first to review “A Place of Remembrance” Cancel reply 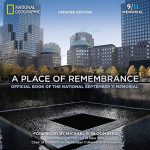 A Place of Remembrance