Commander Byrd Receives the Hubbard Gold Medal: The First Explorer to Reach the North Pole by Air Receives Coveted Honor at Brilliant National Geographic Society Reception
In presenting the Hubbard Medal to Commander Byrd in honor of his successful flight to the North Pole, President Calvin Coolidge praised the superb courage of the man willing to set forth on such a great adventure in the unexplored realms of the air.
Flying Over Egypt, Sinai, and Palestine: Looking Down Upon the Holy Land During an Air Journey of Two and a Half Hours from Cairo to Jerusalem
With expectations of future tourist travel, a pair of military officers point out the pyramids, the Suez Canal, and other sights from several thousand feet in the air.
The First Flight to the North Pole
Lt. Comdr. Richard Evelyn Byrd reports on his milestone flight over the North Pole, which completely verified Peary’s observations. His journey by monoplane took less than a day, compared to Peary’s overland trek which kept him out of touch with civili
Marching Through Georgia Sixty Years After: Multifold Industries and Diversified Agriculture Are Restoring the Prosperity of America’s Largest State East of the Mississippi
Rich in natural resources, the state of Georgia is on an upswing, building roads, hydroelectric plants, and factories for processing not just cotton but also sugar, turpentine, brick, and paper.

Be the first to review “National Geographic September 1926” Cancel reply 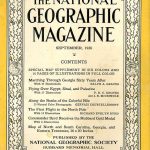