Ascension Island, an Engineering Victory
Located halfway between South America and Africa, the tiny, bird- covered volcanic island of Ascension is a vital military refueling station with an airfield.
Liberated Ukraine
Devastated by war, Ukraine, a Soviet socialist republic, is inching its way toward recovery as Ukrainians rebuild the beautiful region of rich agricultural land and mineral wealth.
The Isles of Greece
On a schooner in the Aegean, seven people explore Greek ruins, vineyards, and the whitewashed towns of several Greek islands, including Mykonos, Delos, and Thira ( Santorini) .
Nigeria: From the Bight of Benin to Africa’s Desert Sands
From the busy markets of Lagos to the Yoruba country, Nigeria is a diverse African country of many tribes, languages, and customs.
Coal: Prodigious Worker for Man
Mined primarily in Pennsylvania and West Virginia, coal and its by- products are used to produce power, steel, vitamins, rubber, fertilizer, dyes, and insecticides.

Be the first to review “National Geographic May 1944” Cancel reply 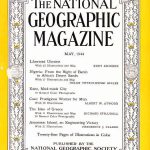