Here’s New York Harbor
In New York Harbor, the Statue of Liberty keeps watch over a port that is busy at all hours, with activity ranging from cruise ships to cargo vessels, tugboats, houseboats, and the infrequent smuggler.
Crusader Lands Revisited: A Distinguished Historian Retraces the Route of Medieval Knights from Istanbul to the Holy Cities of Christianity’s Birth
A distinguished historian traces the route of the medieval crusader knights from Istanbul to the holy cities of the New Testament.
Safari from Congo to Cairo
In this article, Mrs. Grosvenor continues her report on present- day Africa, as seen in 30, 000 miles of travel throughout the continent with her husband Gilbert H. Grosvenor, as a celebration of their 50th wedding anniversary.
Viking Festival in the Shetlands
Over a thousand years ago Norsemen pillaged and colonized the Shetland Islands, the most northern part of Scotland. The Viking spirit lives on in the festival of Up Helly Aa, held each January at Lerwick, the capital of the islands.

Be the first to review “National Geographic December 1954” Cancel reply 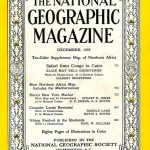