American Birds of Prey- -A Review of Their Value
Prejudice against birds of prey blinds Americans to their value in controlling the population of rodents and destructive insects.
Glimpses of Siberia, the Russian Wild East
A largely undeveloped land, this Russian Wild East possesses incalculable natural resources, pioneers, and free thinkers.
Haiti, the Home of Twin Republics
Hispaniola, second in size in the Caribbean only to Cuba, is a place of 10, 000- foot mountains and dense forests of palm, mahogany, mimosa, and pine.
A Little- Known Marvel of the Western Hemisphere: Christophe’s Citadel, a Monument to the Tyranny and Genius of Haiti’s King of Slaves
One of the world’s extraordinary feats of engineering and construction sits in the Haitian mountains: a 19th- century citadel ordered built at the summit of a 5, 000- foot mountain in the country’s north.
Haiti and Its Regeneration by the United States
Blessed with natural advantages yet plagued by more than a hundred years of tyranny, Haiti experiences the beginnings of law and order, when U. S. troops arrive in 1915.
Falconry, the Sport of Kings: Once the Means of Supplying Man’s Necessities, It Has Survived the Centuries as One of the Most Romantic Pastimes of History
Since Egyptian and Persian times, the complex techniques of falconry have served to bring fowl to dinner tables the world over.

Be the first to review “National Geographic December 1920” Cancel reply 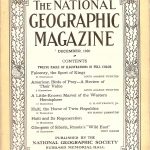