Mecca the Mystic: A New Kingdom Within Arabia
Hejaz, recently liberated from Turkish rule, includes Mecca, a sacred city of Islam.
Russia from Within: Her War of Yesterday, Today, and Tomorrow
As the U. S. enters the war, a history of Russian involvement is presented. A special correspondent with the Russian armies concludes that the Russians have by their contribution saved Europe, even if they fight no more.
Industry’s Greatest Asset- -Steel
In light of the vast quantities of munitions pouring forth from American factories, the author surveys the history of this wonder metal and how it is manufactured.
The Flower of Paradise : The Part Which Khat Plays in the Life of the Yemen Arab
Sacrificing himself to science, the author eats kat, a psychoactive substance in a plant imported centuries ago into Yemen from Abyssina. Chewing kat is an integral part of daily life in Yemen.

Be the first to review “National Geographic August 1917” Cancel reply 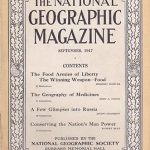