Operation Crossroads
Eight Kodachromes and two paintings make up this photo essay of the U. S. atomic tests on Bikini Atoll ( Marshall Islands) .
Steel: Master of Them All
Albert W. Atwood describes the many products made from steel and the processes that go into creating them.
Finding the Tomb of a Warrior- God
The 1946 Columbia University Archeological Expedition to Peru explored the Viru Valley to discover the civilization of the Mochica people, and learn more about their brief but brilliant flowering.
The Flying Telegraph
In addition to radio, telephone, and telegraph, the U. S. Army in World War II also made use of one of the oldest means of long- distance communication: homing pigeons. These silent messengers are credited with saving thousands of lives.
Hong Kong Restored
A photo essay shows the renaissance of Hong Kong, restored to British rule after occupation by Japanese forces during World War II.
Backwoods Japan During American Occupation
An examination of the 60 to 65 percent of Japanese lands covered in forests, and interviews with their inhabitants, reveals their condition after World War II.

Be the first to review “National Geographic April 1947” Cancel reply 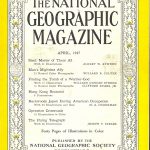