Air Cruising Through New Brazil: A National Geographic Reporter Spots Vast Resources Which the Republic’s War Declaration Adds to Strength of United Nations
Brazil, which declared war on Germany and Italy in August 1942, struggles to improve its cities and create a New Brazil.
Wartime in the Pacific Northwest
The Pacific Northwest is dotted with American and Canadian cities that shelter 50, 000 soldiers.
Rehearsal at Dieppe
On August 19, 1942, the German- occupied city of Dieppe, France, survived the first onslaught of American ground troops battling the Nazis in continental Europe.
New Delhi Goes Full Time
The unofficial capital of the United Nations in Asia, New Delhi has ancient streets and colorful marketplaces that overflow during wartime.
Life on the Hawaii Front : All- out Defense and Belt Tightening of Pacific Outpost Foreshadow the Things to Come on Mainland
The crossroads of the Pacific, Hawaii has changed from a lighthearted tourist paradise to a serious military outpost.

Be the first to review “National Geographic October 1942” Cancel reply 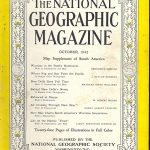