North Dakota has thousands of wells and temporary laborers – all because of fracking. What’s the cost to the land and its people?

Midnight in the Garden

The Wild Life of a Bonobo

The ape famous for making love isn’t as peach loving as we once thought.

Drones May Be Watching You

Unmanned aircraft are poised to move from military areas to U.S. highways and byways.

Be the first to review “National Geographic March 2013” Cancel reply 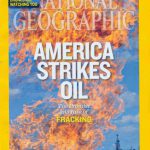