Syria: The Land Link of History’s Chain
With the withdrawal of Turkish power, this land of latent wealth may yet realize its 20th- century destiny for world- class trade.
The Rise of the New Arab Nation
Sprung free from Turkish hegemony and its own hermit spirit, the Arabian Peninsula holds far- reaching possibilities for peace and trade.
The Land of the Stalking Death: A Journey Through Starving Armenia on an American Relief Train
American relief helps Armenians cope with poverty after the break up of the Russian empire as hunger and war devastate these moutain people.
Where Slav and Mongol Meet
Color photos of some of the peoples of the Caucasus and Central Asia.

Be the first to review “National Geographic November 1919” Cancel reply 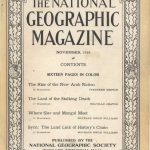