It’s Time for a Conversation

When one of Earth’s smartest creatures vocalizes, it fuels a heated debate among scientists: Are dolphins actually speaking a complex language?

With its bankruptcy in the rearview mirror, the Motor City is attracting investors, innovators, and adventurous would-be fixers.

Quest for a Superbee

Honeybees top the list of insect pollinators on which one-third of food crops depend. Can we breed a hardier bee?

A pilgrimage through France and Spain is “an ancient tradition thriving in a modern world.”

Be the first to review “National Geographic May 2015” Cancel reply 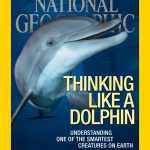