Sights and Sounds of the Winged World: Study of Birds to Make NATIONAL GEOGRAPHIC Color Photographs Yields Rich Scientific Knowledge of Their Habits and Behavior
Discoveries in ornithology are described by Arthur A. Allen. Learn how owls see at night, if birds have a sense of smell, and how a hawk views the world.
China Fights Erosion with U. S. Aid
A group of soil scientists and specialists enlist in China’s fight against soil erosion. As thousands of refugees from the Japanese occupation stream into Free China, new methods of soil preservation and food production must be found.
Stilwell Road- -Land Route to China
The Stilwell Road links northern India and Yunan Province of China through Burma. The U. S. Army Corps of Engineers reopened the road in January 1945 after the Japanese retreat, despite massive challenges that threatened control of the vital route.
Tai Shan, Sacred Mountain of the East
Tai Shan is the most revered of the five sacred mountains of China. Even in wartime, pilgrims, vendors, and tourists ascend the 6, 700 steps, from the base to the Temple of the Jade Emperor, at its peak.
Americans Help Liberated Europe Live Again
As Europe repairs itself after World War II, the U. S. Army and military government work to ease the transition of newly freed countries back to civilian control.
The Society’s New Map of China
A new color map of China rounds out a complete set of maps released over a three- year period. This affords members complete coverage of the war against Japan.
George W. Hutchison
The Society pays tribute its Secretary, George W. Hutchison, who recently passed away.

Be the first to review “National Geographic June 1945” Cancel reply 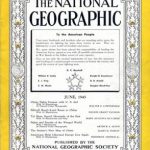