Childhood Summer on the Maine Coast { Seashore Summer}
The rocky Maine shoreline teems with life before the eyes of two small boys.
The Winds of Freedom Stir a Continent { Africa: The Winds of Freedom Stir a Continent}
Independence is a watchword for African countries newly free and those still yearning for liberty.
Finding the World’s Earliest Man
After nearly 30 years of painstaking detective work, archaeologist Louis Leakey makes the discovery of a lifetime.
Across the Ridgepole of the Alps
Cable cars swing passengers to new heights with breathless ease.
Where Elephants Have Right of Way
East Africa is the last holdout for roaming herds of big game in a developing world.
The Last Great Animal Kingdom
Photographs capture increasingly rare scenes of disappearing African wildlife.

Be the first to review “National Geographic September 1960” Cancel reply 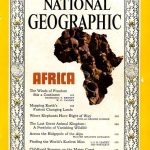