Pigeon Netting- -Sport of Basques
A photo- essay highlights the autumn Basque sport of snaring migrating wood pigeons.
Power Comes Back to Peiping
For over 3, 000 years, the city of Peiping ( Beijing) has been a seat of power in China. Following tradition, communist rulers decide to return the government’s capital from Nanking ( Nanjing) to Peiping.
Cruise to Stone Age Arnhem Land
On a voyage to deliver food and supplies to the Arnhem Expedition in northern Australia, the Phoenix runs aground in isolated Boucat Bay and affords her crew an opportunity to get to know aborigines and local missionaries.
Minnesota Makes Ideas Pay
Riding the wave of the postwar boom, Minnesota aims to be in the forefront of intellectual and scientific achievement.
First Motor Sortie into Escalante Land
A joint expedition of the National Geographic Society and the New York Explorers Club is the first to venture by all- wheel- drive into the Escalante wilderness, south of Bryce Canyon National Park.

Be the first to review “National Geographic September 1949” Cancel reply 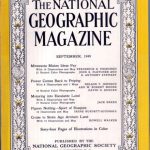