Born Hunters, the Bird Dogs
Spaniels, setters, pointers, and retrievers continue the age- old partnership of dog and owner in pursuit of game. These dogs also compete in field trials and obedience competitions, rewarded by the satisfaction of a job well done.
Eclipse Hunting in Brazil’s Ranchland
A joint expedition of the National Geographic Society and the U. S. Army Air Forces observes a total eclipse of the sun on May 20, 1947.
Split- second Time Runs Today’s World
The Earth’s rotation is timed nightly in Washington, D. C. at the U. S. Naval Observatory, the official keeper of the nation’s time. Accurate time is important to sailors, the military, as well as those of us who have to get up and go to work each morn
Indian Life Before the Colonists Came
The drawings made by Jacques le Moyne de Morgues and John White in the late 1500s, depict Native American life before theEuropeans came. Stuart E. Jones describes the fate that befell the artists and their subjects.
Exploring America’s Great Sand Barrier Reef
The great sand barrier reef extends some 200 miles south from the mouth of the Chesapeake Bay into the Atlantic Ocean. Meet the people who make their homes along its ever- changing coastline.

Be the first to review “National Geographic September 1947” Cancel reply 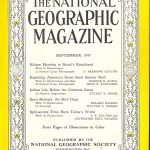