Birds of Timberline and Tundra
After the construction of a large airfield, in Churchill, Manitoba, Canada, the birds appear generally unaffected, and the improved access is a boon to naturalists studying the area.
New Frontier in the Sky
With the beginning of space exploration, the technology that came from World War II is given a peaceful purpose. Jets, rockets, radar, and balloons all play their parts in the rapidly expanding field of study.
An Insect Community Lives in Flower Heads
A weed known as shepherd’s needles forms the basis for this study of the lifecycles and relationships among plants and insects.
Arkansas Rolls Up Its Sleeves
Postwar Arkansas’s economy is shifting from purely agricultural to a mix that includes mining, industry and tourism.
America on the Move
A photographic essay of the changing travel habits of Americans in the postwar era.

Be the first to review “National Geographic September 1946” Cancel reply 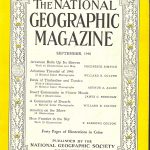