Keeping House in Borneo
Virginia Hamilton lived in Borneo with her husband and child for ten years. In this article, she describes how she learned to adapt to life without modern conveniences and do battle with insects, reptiles, and rodents.
Flying Our Wounded Veterans Home
In 1943, air evacuation of the wounded from World War II battlegrounds began. By 1944, one of every five casualties from Europe was brought to the United States by air. Catherine Bell Palmer interviews some of the passengers and flight nurses about thei;
Our New Military Wards, the Marshalls
With the closing of World War II, U. S. forces have gradually gained control of the island groups of Micronesia. Among the first areas captured were the Marshall Islands, a string of 34 coral atolls and single islands. W. Robert Moore reports on the peop
Northeast of Boston
Life along the rocky New England coastline, northeast of Boston and up to Canada, centers on fishing, shipbuilding, lobstering, and other maritime pursuits. Albert W. Atwood describes how life for the tough and hardy New Englanders has evolved since colo

Be the first to review “National Geographic September 1945” Cancel reply 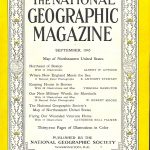