China Opens Her Wild West: In the Mountain- girt Heart of a Continent a New China Has Been Created During the Years of War
Led by Gen. Chiang Kai- shek, Free China, the western part of the country not occupied by Japan, works to develop new technology to protect itself against further invasion.
Greenland Turns to America
Isolated and in need of supplies, Greenland asks the United States for aid, and the first American consulate spends two years among the Eskimos who inhabit the world’s biggest island.
Forty Years Among the Arabs
An American man lives for 40 years with the hospitable people of Iraq and studies the region’s languages, irrigration systems, and Bedouin clans.
Strategic Alaska Looks Ahead: Our Vast Territory, Now Being More Closely Linked to Us by Road and Rail, Embodies the American Epic of Freedom, Adventure, and the Pioneer Spirit
Jagged peaks, green meadows, clear blue inlets, and abundant wildlife contribute to the beauty of Alaska, a key to the defense of the United States.
Discovering Alaska’s Oldest Arctic Town: A Scientist Finds Ivory- eyed Skeletons of a Mysterious People and Joins Modern Eskimos in the Dangerous Spring Whale Hunt
Scientists unearth an ancient town of 600 houses and log tombs in Alaska’s Point Hope, and learn whale hunting from local Eskimos.
Bizarre Battleground- -the Lonely Aleutians
Attacked once already by Japanese forces, Alaska’s foggy, volcanic Aleutian Islands are poised for more action.

Be the first to review “National Geographic September 1942” Cancel reply 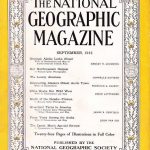