Chesapeake Odyssey: An 18- foot Sailboat Follows the Course of Captain John Smith around This Spacious Bay of History, Commerce, Sea Food, and Nautical Lore
Nicknamed the bathtub because of its small size, an 18- foot sailboat explores the many inlets of the Chesapeake Bay.
Rio Panorama: Breath- taking Is This Fantastic City amid Peaks, Palms, and Sea, and in Carnival Time It Moves to the Rhythm of Music
Against a backdrop of rocky peaks and dense jungle, Rio de Janeiro, Brazil’s capital, is a city of lively cafes, colorful carnivals, pulsing music, and popular beaches.
Old and New in Persia: In This Ancient Land Now Called Iran a Modern Sugar Factory Rears Its Head Near the Palace of Darius the Great
Tiled mosques rise from the desert of Iran. Though the country is speckled with new roads and factories, Iran still protects its ancient Persian treasures.
Life’s Flavor on a Swedish Farm: From the Rocky Hills of Smaland Thousands of Sturdy Citizens Have Emigrated to the United States
A third of all Swedish emigrants to the United States once lived on the highland plateau of Smaland, where residents spin wool, cut hay, plant rye, and spend countless hours hauling rocks from their farms.

Be the first to review “National Geographic September 1939” Cancel reply 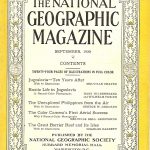