Trans- Africa Safari: A Motor Caravan Rolls Across Sahara and Jungle Through Realms of Dusky Potentates and the Land of Big- Lipped Women
On a six- month safari from Algiers to Nairobi, an expedition explores thousands of miles of African desert and jungle, discovering Ubangi villages and elephants, crocodiles, and other animals.
On the Bottom of a South Sea Pearl Lagoon
Two thousand miles south of Honolulu, in the Pacific, divers plumb Tongareva’s lagoon of pearl oysters, moray eels, sharks, and giant clams.
Connecticut, Prodigy of Ingenuity
Once the home of Mark Twain, Connecticut teems with modern factories which speckle the New England state along with beaches, rivers, tobacco farms and great universities such as Yale.
Among the Big Knot Lois of Hainan: Wild Tribesmen With Topknots Roam the Little- known Interior of This Big and Strategically Important Island in the China Sea
Tattooed Loi ( Li) aborigines live on the large Chinese island of Hainan, an important military base in the South China Sea.

Be the first to review “National Geographic September 1938” Cancel reply 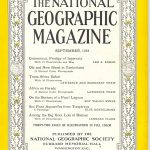