The Unexplored Philippines from the Air: Map- making Over Jungle Lands Never Before Seen By White Men
A Manila- based U. S. Army team photographs the northeast corner of Luzon for the Coast and Geodetic Survey’s maps and discovers volcanoes, terraced hills, and gold mine- filled mountains.
The Great Barrier Reef and Its Isles: The Wonder and Mystery of Australia’s World- Famous Geographical Feature
Host to colonies of birds, fish, reptiles, and plant life, the world’s largest coral reef lures scientists intrigued by its submarine treasures.
The Color Camera’s First Ae?rial Success
Melville Bell Grosvenor takes to the air in a dirigible, capturing the Statue of Liberty, the Washington Monument, and other American landmarks in natural color with improved photographic plates.
Jugoslavia- -Ten Years After
A decade after the postwar peace conference established Jugoslavia’s ( Yugoslavia’s) boundaries, the author’s party observes a blend of European and Asian cultures infused with flapper dresses, shopping districts, and medieval churches.

Be the first to review “September 1930” Cancel reply 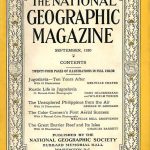