Exploring 1, 750, 000 Years Into Man’s Past
East Africa’s Olduvai Gorge continues to yield remarkable fossil clues to early human development.
Into the Well of Sacrifice { Treasure Hunt in the Deep Past}
Divers working with an air lift recover some 4, 000 artifacts from a Maya well during four months of intensive searching.
Into the Well of Sacrifice { Return to the Sacred Cenote}
Ancient Maya staged countless human sacrifices at this large well deep in the Yucatan bush.
South Viet Nam Fights the Red Tide
Nearly two billion American dollars have bolstered the military might of a nation where the communist threat looms ever larger.
A Clock for the Ages: Potassium- Argon
A scientific tool surpasses carbon dating’s limit of 50, 000 years reaching millions of years into the past.
Mexico in Motion
The rapidly increasing Mexican population rides a tide of prosperity fueled by growing industry.

Be the first to review “National Geographic October 1961” Cancel reply 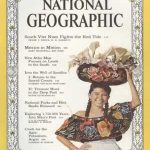