Your New World of Tomorrow
F. Barrows Colton looks at the beginning of the atomic age and describes the benefits of modern technology. Television and radio, improved air and train travel, appliances such as microwave ovens and home freezers are just some of the things expected to;
The Fairy Wrens of Australia
Neville W. Cayley describes the 13 distinct species of fairy wrens, also known as the blue birds of happiness that live down under. Color illustrations by the author.
Flaming Cliffs of Monument Valley
Monument Valley on the Arizona- Utah border is a part of the Navajo tribal lands. Jack Breed recounts his impressions of the spectacular red sandstone cliffs and buttes.
Okinawa, Threshold to Japan
Okinawa is a small island in a strategic place, as U. S. forces discovered at the close of World War II. David D. Duncan visits the island after its liberation from the Japanese, to learn how its people have survived.
Lend- Lease and the Russian Victory
Harvey Klemmer examines America’s Lend- Lease program. This development in U. S. foreign policy aided the Soviet Union’s fight against Nazi invaders, providing the country with over nine billion dollars in goods and services.
Jap Rule in the Hermit Nation
Korea, the Land of the Morning Calm, slowly emerges from Japanese domination. Willard Price visits the mountainous country and learns about its ancient history, culture, and people.
Guest in Saudi Arabia
The booming oil industry has brought wealth and prosperity to the Kingdom of Saudi Arabia. Maynard Owen Williams visits this desert sheikdom and talks with King Abdul Aziz al Saud about his kingdom’s future.

Be the first to review “National Geographic October 1945” Cancel reply 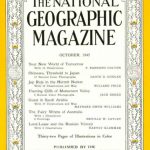