Springboards to Tokyo
Japan’s island groups, known as the Bonins, Marianas, Carolines, and Marshalls, are the key to eroding Japan’s barricade of the Pacific.
Capital and Chief Seaport of Chile
Santiago, the capital of Chile, was founded in 1541 by Spanish conquistador Don Pedro de Valdivia. In foggy Valparaiso, Chile’s chief port, trade has slowed during wartime.
Painting History in the Pacific
These 19 paintings by a U. S. Navy artist depict the U. S. air strike against Japan’s Palau Islands.
What the Fighting Yanks See
Soldiers return from war with exotic but true stories of land crabs on Guadalcanal, hornbills of the Solomon Islands, white cockatoos of New Georgia, giant spider webs on New Caledonia, and termites in Australia.
Marseille, Battle Port of Centuries
Settled in 600 B. C. by Greek colonists, France’s spirited city of Marseille remains an important Mediterranean port.
The Delectable Shrimp: Once a Culinary Stepchild, Today a Gulf Coast Industry
Shrimp have become a popular seafood and a lucrative business to fishermen of the southern Atlantic and Gulf Coast states, who provide 98 percent of the shrimp caught in the United States.

Be the first to review “National Geographic October 1944” Cancel reply 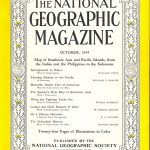