We Keep House on an Active Volcano: After Flying to Study a Spectacular Eruption in Belgian Congo, a Geologist Settles Down on a Newborn Craterless Vent for Eight Months’ Study
Hoping to learn more about volcanic activity, a geologist moves to the Belgian Congo in central Africa to observe a 10, 026- foot volcano.
Deer of the World: As Workers, Pets, and Graceful Living Statuary in Parks and Estates, These Versatile Creatures Have Endeared Themselves to Mankind
Scientists have identified nearly 60 different kinds of deer, including caribou, elk, and moose.
Down the Rio Grande: Tracing this Strange, Turbulent Stream on Its Long Course from Colorado to the Gulf of Mexico
Cutting dramatic canyons along the way, the Rio Grande courses through Colorado, New Mexico, and Texas, where it forms the border between the United States and Mexico.
War Clouds Over Danzig and Poland’s Port
In August 1939 the Polish city of Danzig refused to yield to Hitler’s command that the city be returned to German rule, casting a shroud of anxiety over the city.

Be the first to review “National Geographic October 1939” Cancel reply 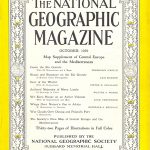