Augustus- -Emperor and Architect
The rise of Augustus from sickly child to brilliant emperor of Rome parallels the amazing expansion of the Roman Empire and its architecture, much of which still remains today.
Treasures of the Pacific: Marine Fishes and Fisheries Yield Vast Wealth from Alaska to Baja California
Fishermen flock to America’s West Coast because of the variety of fish in the Pacific Ocean, from large marlin to small flying fish.
Hawaii, Then and Now: Boyhood Recollections and Recent Observations by An American Whose Grandfather Came to the Islands 102 Years Ago
The author presents boyhood recollections and recent observations on the Hawaiian Islands, where his grandfather settled over 100 years ago.
The Farthest- North Republic: Olympic Games and Arctic Flying Bring Sequestered Finland into New Focus of World Attention
Helsinki, Finland is the capital of a nation of castles, crowded markets, lumber yards, and more than 65, 000 lakes.

Be the first to review “National Geographic October 1938” Cancel reply 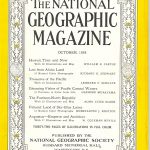