Address of the President to the Board of Managers, June 1, 1900
Alexander Graham Bell expresses his desire to further develop the Society as a national organization with national representation. To achieve this goal he suggests increased emphasis on the magazine and the construction of a permanent headquarters.
Through the Heart of Africa
Two Englishmen complete an unprecedented journey through the heart of Africa, from Cape Town to Cairo. They encounter many diverse peoples from the compactly- built Pygmies of the forests to the colossal Dinka cattlemen.
Excavations at Nippur
Excavations under the auspices of the University of Pennsylvania uncover a great library of ancient Babylonia, replete with thousands of tablets covered with cuneiform writing.
Nansen’s Farthest North Eclipsed
The Duke of Abruzzi establishes a new mark for farthest north, and plans a joint expedition to the North Pole with Dr. Nansen, whose record he has beaten.
Hunan- -The Closed Province of China
The author surveys a railway route through the populous and resource rich province of Hunan, the last Chinese province to be explored and mapped by Westerners.
The West Indian Hurricane of September 1- 12, 1900
The hurricane of September 1900 was a disaster unparalleled in American history. Over 5, 000 people lost their lives when the storm crushed Galveston, Texas.
The Lessons of Galveston
The city of Galveston was devastated in a single night by wind and wave. An interpretation of natural records suggests that the city’s location made such a tragedy inevitable.

Be the first to review “National Geographic October 1900” Cancel reply 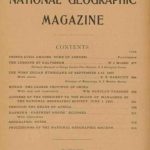