Atlantic Salmon Struggle to Survive { Can the Atlantic Salmon Survive? ; Atlantic Salmon: The Leaper Struggles to Survive}
The noble leaper is making a comeback in rivers of the northeastern United States, but man’s dams, pollution, and fishing fleets continue to take a heavy toll on both sides of the Atlantic. By Art Lee, with photographs by Bianca Lavies.
New Jersey: A State of Surprise
From factories to refineries to verdant farms and pinelands, from reclaimed garbage dumps to glittering gambling halls, journalist Jim Hartz discovers America in miniature in the state that turnpike tourists love to hate. Photographs by Bob Krist and Mi;
How Menacing Is Acid Rain? { Acid Rain- -How Great a Menace? }
Fishless lakes in North America and Scandinavia raise concern about the chemical showers that observe no boundaries and pose many questions. Anna LaBastille and Ted Spiegel document an increasing problem of the industrial age.
After Rhodesia, Zimbabwe { A Nation Named Zimbabwe; After Rhodesia, a Nation Named Zimbabwe}
Out of Rhodesia’s long conflict has emerged a black- ruled republic faced with healing the wounds of war and fulfilling the promise of peace. Charles E. Cobb, Jr. , assesses its progress thus far. Photographs by James L. Stanfield and LeRoy Woodson, Jr.
A Durable Scale of Values { The Natural World of Aldo Leopold; Aldo Leopold: A Durable Scale of Values }
Naturalist, craftsman, teacher, conservationist, philosopher – – Aldo Leopold was all these and more. Boyd Gibbons and photographer Jim Brandenburg portray the sage of Wisconsin’s prairie and woodlands.

Be the first to review “November 1981” Cancel reply 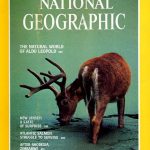