California’s Great Central Valley { More Water for California’s Great Central Valley}
California’s water diversion and damming projects enhance the state’s agriculture, hand in hand with new farming techniques and expanding crops.
Sigiriya, A Fortress in the Sky
Ceylon, now Sri Lanka, is home to a fortress known as Sigirya in a remote and mountainous area. Wilson K. Norton explores the art and architecture of the ancient ruins.
Ancient Rome Brought to Life
Scenes from ancient Rome are depicted in 32 paintings based on contemporary sources and modern remains.
The Roman Way
Life in Republican Rome is revealed through letters, plays, and literature of the time.
Demolishing Germany’s Ramparts { Demolishing Germany’s North Sea Ramparts}
The island of Helgoland in the North Sea served as a naval base for Germany’s war effort. The emplacement was destroyed by Great Britain with the help of its United Nations partners.

Be the first to review “National Geographic November 1946” Cancel reply 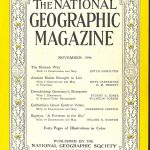