Charting a World at War
The men of the U. S. Coast and Geodetic Survey risk their lives to survey and chart land and sea, using calculus and trigonometry to produce aeronautical and other maps for the U. S. armed forces.
Infantrymen- -The Fighters of War
The infantrymen of World War II use many types of weapons, including howitzers, M1 rifles, machine guns, bazookas, and flame throwers.
Mindanao, on the Road to Tokyo
Though primarily unexplored, Japanese- occupied Mindanao, the southernmost main island of the Philippines, is rich in gold mines, forests, wild boars, monkeys, and crocodiles.
Coffee Is King in El Salvador
Although the Central American republic of El Salvador has the densest population of mainland North and South America, its combination of shade, altitude, and slightly acidic soil produces the best coffee in the world.

Be the first to review “National Geographic November 1944” Cancel reply 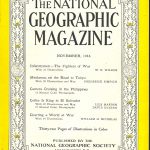