Crete, Where Sea- Kings Reigned
Rich in natural beauty and hospitality, the Mediterranean island of Crete is the site of the ancient Minoan culture.
Cruise on an Escort Carrier
Known as escort carriers, giant ships with flight decks search the oceans for enemy ships and submarines.
The Healing Arts in Global War: As Weapons Grow Deadlier, Scientific Medicine Pits Its Ever- rising Skill Against Them
As doctors treat wounded soldiers overseas, medicine in foreign lands may improve.
I Learn About the Russians
A reporter befriends some Russians and discovers that while they suffer through the war, they continue to sing, attend the ballet and theater, and cling to hope.
Non- sporting Dogs
Categorized by kennel clubs as dogs that lack hunting skills, nonsporting dogs include Dalmatians, poodles, and bulldogs.
Pelican Profiles
Pelicans thrive on a refuge in the 30- mile- long Salton Sea in the Colorado Desert.

Be the first to review “National Geographic November 1943” Cancel reply 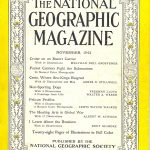