Outwitting the Water Demons of Kashmir
Lakeside in Srinagar, the Church Mission School teaches young Kashmiri men swimming, rowing, and other character- forming skills.
A Pilgrimage to Amernath, Himalayan Shrine of the Hindu Faith
Trekking through the rugged mountains of the kingdom of Kashmi five travelers reach a Hindu mecca, an icy cave where the god Siva, the great destroyer, is believed to bestow everlasting life.
The Marble Dams of Rajputana
Rajasthan, India’s mountainous heart where Rajpur kings fought off Muslim invaders, is a land of palace, temple, and fortress – – and artificial lakes formed by dams of pure marble.
Through the Heart of Hindustan: A Teeming Highway Extending for Fifteen Hundred Miles, from the Khyber Pass to Calcutta
From its origins in the arid Afghan borderland, past the incomparable Taj Mahal to the docks of Calcutta, India’s main street traverses one of the most populated regions in the world

Be the first to review “National Geographic November 1921” Cancel reply 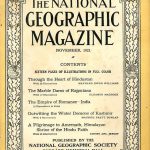