Brazil’s Kayapo, Cursed by Gold { Brazil’s Kayapo Indians: Beset by a Golden Curse; Indians Cursed by Gold; Beset by a Golden Curse: Brazil’s Kayapo Indians}
For villagers of the Amazon Basin, a gold rush on their land means new wealth – – along with pollution, invading miners, and many of the headaches of civilization, as Vanessa Lea and Miguel Rio Branco discover.
Krill: Untapped Bounty? { Krill- -Untapped Bounty From the Sea? }
These tiny crustaceans are whale food today, but they offer man a vast store of protein that just might – – and might not – – be worth the trouble of harvesting. Biologist William M. Hamner and photographer Flip Nicklin examine a superb Antarctic species
After 2, 000 Years of Silence: The Dead Do Tell Tales at Vesuvius { The Dead Do Tell Tales at Vesuvius}
For nearly 2, 000 years they lay mute, hidden in a tomb of hardened ash. Today their bones speak volumes to scientists piecing together their lives and fiery deaths. Rick Gore and O. Lois Mazzatenta report on the latest excavations at Herculaneum and Po;
Washington’s Olympic Peninsula { The Olympic Peninsula}
Giant trees, glaciered peaks, and wild shores dominate Washington State’s green thumb. Bill Richards and Sam Abell give us a vivid look at the land and its people.
A Prayer for Pozzuoli
Pozzuoli, a thriving port when Vesuvius erupted, now waits in terror as its own huge volcano stirs uneasily to life. Rick Gore and Louis Mazzatenta find the land rising as magma surges beneath it.

Be the first to review “National Geographic May 1984” Cancel reply 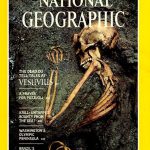