Lundy, Treasure Island of Birds
Lundy is a little- known island in the Atlantic off the coast of Devon. Only 11 humans live there, but thousands of migratory birds call it home. This private little kingdom has a romantic and swashbuckling history.
Cruising Colombia’s Ol’ Man River
The Magdalena River is the main highway through the highlands of Colombia from the Caribbean to Bogota. Life in the cities and villages along its banks, reveals much about this remote country.
Your Society Observes Eclipse in Brazil
On May 20, 1947, a joint expedition of the National Geographic Society and the U. S. Army Air Forces, observed a total eclipse of the sun. This was the first televised eclipse.
Big Game Hunting in the Land of Long Ago
Big- game animals including rhinos, saber- toothed cats, giant pigs, tapirs, and horses lived and died on the Badlands of South Dakota thirty million years ago. A joint expedition of the National Geographic Society and the South Dakota School of Mines an
South Dakota Keeps Its West Wild
Farmers, cowboys, and Indians are still around today, as South Dakota is very much aware of its Wild West foundations.
Nautical Norfolk Turns to Azaleas
In 1938, a project to create an azalea park outside of Norfolk, Virginia began with a grant of $ 50, 000 and the inspiration of horticulturist Frederic Heutte. After nine years, the park covers more than 40 acres and contains azaleas, rhododendrons, iris
Flying Squirrels, Nature’s Gliders
The antics of pet flying squirrels, Brother and Beautiful, provide some insights into the habits of this little- seen nocturnal rodent.

Be the first to review “National Geographic May 1947” Cancel reply 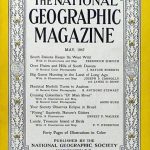