Nebraska, the Cornhusker State
In the 75 years since attaining statehood, Nebraska transformed itself from a dry and dusty plain to the sixth most important state with valuable agricultural and livestock products. Leo A. Borah reports on the hard work and prosperity that characterize;
They Survived at Sea
Thanks to the efforts of the U. S. Navy’s Air- Sea Rescue Service, 85 percent of the seamen and air pesonnel whose planes and ships sink are rescued and returned to safety. However, surviving until the Rescue Service can find you is tricky business.
The United States and the British Empire
As would be expected from a former colony, the United States has widely different views from the United Kingdom on issues regarding colonies and dependent territories. A member of Parliament reviews these diverging philosophies.
Peacetime Rambles in the Ryukyus
The Ryukyus are a remote island chain off the Japanese mainland. As World War II draws to a close, William Leonard Schwartz recalls life in peacetime Okinawa, the largest and best known of the Ryukyu Islands.
The Turkish Republic Comes of Age
The Turkish Republic was declared in October 1923. Twenty- two years later, Maynard Owen Williams visits the fledgling democracy and describes the vast changes brought about in this Islamic land, where women enjoy political and social equality.
Normandy’s Made- in- England Harbors
Mulberry was the code name for the giant portable harbors designed and built by the U. S. and England. These artificial harbors, each the size of Dover’s port, upset Hitler’s strategy and made the invasion of Normandy possible. This article examines ho

Be the first to review “National Geographic May 1945” Cancel reply 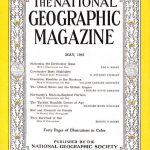