Maps for Victory: National Geographic Society’s Charts Used in War on Land, Sea, and in the Air
Because the Army, Navy, and other government agencies rely on National Geographic Society maps, the Society specially reprints maps nine times a year for military use.
Americana
These lighthearted photographs of the people and animals of America are some of the winners of the Seventh Annual Newspaper National Snapshot Awards.
As 2, 000 Ships Are Born
By the end of 1943, the United States plans to build 2, 000 more ships to carry troops and supplies to Europe and the Pacific.
Family Afoot in Yukon Wilds: Two Young Children and Their Parents Live Off the Country in the Northwest Canada Wilderness Now To Be Traversed by the Alaska Highway
Scouting northwestern Canada for a new highway route, a family hikes more than 300 miles of the Yukon Territory, surviving on wild berries, vegetables, fish, and game.
Tidewater Virginia, Where History Lives
Not far from crowded Washington, D. C. , tidewater Virginia is a placid region of rivers and estuaries with a strong colonial history.

Be the first to review “National Geographic May 1942” Cancel reply 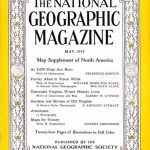