Four Thousand Hours Over China
Through fog, hail, and bullets, a pilot describes four years of adventurous flights over China’s temples, peaks, and vast plains.
Singapore: Far East Gibraltar in the Malay Jungle
Once a jungle island, the British naval base of Singapore, a strategic point along the Strait of Malacca, has become the crossroads of the East.
Monkey Folk
Admired by humans for their curiosity and sense of mischief, wild monkeys vary in size, color, and behavior.
New Mexico Melodrama
Land of ranches, striking rock formations, vast caves and adobe houses, New Mexico’s history began before European settlers reached America.
A Frog That Eats Bats and Snakes
The smoky jungle frog of Central and South America is a savvy hunter who catches snakes, lizards, and bats with its sticky tongue and viselike arms.

Be the first to review “National Geographic May 1938” Cancel reply 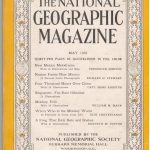