Surveying the Grand Canyon of the Colorado: An Account of the 1923 Boating Expedition of the United States Geological Survey
From its headwaters in the Rockies to its mouth in the Gulf of California, the Colorado River has a phenomenal fall of 10, 000 feet. Not to utilize this drop for power – – to say nothing of irrigation – – is a terrible waste, says the author, who partici
The Isthmus of Tehuantepec
A quixotic U. S. -Mexican project to create an overland link between Atlantic and Pacific through the jungles of southernmost Mexico is undermined by the advent of the Panama Canal. Yet despite the languorous lifestyle of the locals, it is difficult to a
Glimpses East and West in America
The photographer’s lens proves that dramatic views are by no means the sole domain of the U. S. West.

Be the first to review “National Geographic May 1924” Cancel reply 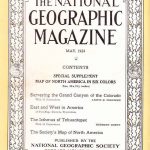