At the Tomb of Tutankhamen: An Account of the Opening of the Royal Egyptian Sepulcher Which Contained the Most Remarkable Funeral Treasures Unearthed in Historic Times
The Tombs of the Kings at Thebes, a hell- hole in the hills where the greatest pharaohs hid themselves, are yielding fantastic stores of furniture, chariots, garments, pottery, and jewelry, and attracting masses of distinguished visitors.
A Visit to Three Arab Kingdoms: Transjordania, Iraq, and the Hedjaz Present Many Problems to European Powers
Sharing a similar flag of a united Syria are three new countries whose rulers, like their boundaries, have been determined by Britain: Transjordan, the Hedjaz, and Iraq.
East of Constantinople: Glimpses of Village Life in Anatolia, the Battleground of East and West, Where the Turks Reorganized Their Forces After the World War
For centuries Anatolia has been a field of incessant warfare between East and West, which is off- limits to foreigners. Disguised as a local auto mechanic, the author accompanies a relief worker on a secret mission to deliver much needed funds to his col

Be the first to review “National Geographic May 1923” Cancel reply 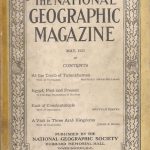