Belgium’s Plight
An S. O. S call is issued to Americans to aid Belgian families separated by sudden mass deportations at the hands of occupying German forces.
Niagara at the Battle Front
Thanks to its great hydroelectric plant, Niagara Falls has become a vast electrical laboratory, producing a number of products vital to the Allied war effort.
Devastated Poland
The author tells of the indescribable woe in Russian Poland, and the mass exodus of Polish refugees.
The Needs Abroad
The British Red Cross, recounting the tragic experiences of the war throughout Europe, encourages Americans to join hands in drawing a great net of mercy through an ocean of unspeakable pain.
On the Monastir Road
Along this historic road, Alexander the Great and his army once marched. This link between the Adriatic and Aegean Seas constitutes a major front between Allied forces and the Central Powers.
Stand by the Soldier
Maj. Gen. John J. Pershing asks Americans to back their men in uniform by contributing to the Red Cross.
A Poisoned World
William Howard Taft, former President of the United States, finds the minds of the German people poised to subordinate every consideration of humanity to the exaltation and the development of military force.
America’s Duty
Although separated from the battlefield and so far suffering only minor losses, the American people are admonished to give all you have to the Red Cross.
Bind the Wounds of France
Recounting the plight of civilians in a small part of northern France that has been recovered from German hands, relief workers appeal for assistance, asking America to congregate the strength of the whole nation into the Red Cross.
Our Armies of Mercy
The Chairman of the War Council of the American Red Cross describes the great challenges ahead for the relief organization.
Help Our Red Cross
Noting that the Civil War seems almost insignificant in its proportions to the First World War, President Wilson calls upon Americans to support the Red Cross.
The Red Cross Spirit
The sacrifices made by willing American Red Cross workers are praised as outstanding voluntary contributions to the war effort.

Be the first to review “National Geographic May 1917” Cancel reply 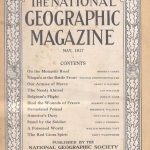