The Greek Way
The people of ancient Greece formed a culture of athletic games and competitions, theater, democracy, and philosophy.
6, 000 Miles over the Roads of Free China
A writer spends five months on the new roads and railways of Free China and finds that the patriotic Chinese are determined to fend off Japanese attack, and are beginning to change old customs and ideas.
Greece- -the Birthplace of Science and Free Speech: Explorations on the Mainland and in Crete and the Aegean Isles Reveal Ancient Life Similar to That of the Present
Not only has ancient Greece influenced many modern traditions such as weddings and funerals, it has affected science, philosophy, and architecture throughout the modern world. This article includes a colorful catalog of scenes from classical Greece.

Be the first to review “National Geographic March 1944” Cancel reply 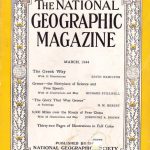