Bolivia- -Tin Roof of the Andes
Bolivia’s climate ranges from warm valleys – – where people grow bananas, coffee, and sugarcane – – to the chilly Andes mountains, where people mine ore that becomes tin. Eighty percent of Bolivians live at an altitude above 10, 000 feet.
San Francisco: Gibraltar of the West Coast
Soldiers, fighter planes, ships, and trucks indicate that San Francisco is a city at war.
Norway, an Active Ally
Though occupied by Nazis, Norway and its three million people support the Allied cause, attacking enemy ships with the Norwegian merchant marine and fighting in the Royal Norwegian Air Force.
Sydney Faces the War Front Down Under
For the first time in its history, Sydney suffered an attack of enemy shells.
Malta Invicta
Bombed by Italy over 2, 500 times, the Maltese people gallantly rise from the rubble to rebuild homes and churches on the three Mediterranean islands known as Malta.

Be the first to review “National Geographic March 1943” Cancel reply 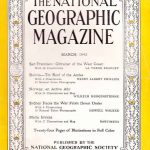