Washington- -Storehouse of Knowledge
With its many libraries, laboratories, universities, and museums, Washington, D. C. , is a world center of science and research.
French West Africa in Wartime
Coveted for its ideal Atlantic port, the French city of Dakar, in West Africa, has sustained bombing and European inundation.
Honduran Highlights
A major banana exporter, the mountainous Central American country is now using both oxcarts and airplanes to transport the fruit.
Revolution in Eating: Machine Food Age- -Born of Roads, Research, and Refrigeration- -Makes the United States the Best- fed Nation in History
Because of the food revolution – – a gradual development of better refrigeration, transportation, factories and research – – American supermarkets now offer a wide selection of foods from around the world.

Be the first to review “National Geographic March 1942” Cancel reply 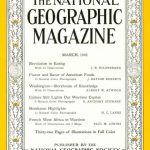