Duke of the Abruzzi in the Himalayas
The Duke of Abruzzi’s expeditions of 1909 included the record- breaking attainment of 24, 583 feet.
Most Curious Craft Afloat: The Compass in Navigation and the Work of the Non- Magnetic Yacht Carnegie
Conducting sea surveys for the Carnegie Institute of Washington, this unique nonmagnetic vessel helps improve geographic knowledge.
National Geographic Society
Society member Congressman J. Hampton Moore will be sending to each reader a copy of his speech to Congress on Commander Peary’s discovery of the North Pole.
The Race for the South Pole
The National Geographic Society awards Sir Ernest Shackleton a Hubbard Medal for his discoveries in the Antarctic and for getting 400 miles nearer to the Pole than any of his predecessors.
Romantic Spain
Cut off from the rest of Europe by the Pyrenees and the sea, Spain has not yet been spoiled by tourism.
Scenes in Switzerland
Photographs capture the beauty of the hills, dales, and villages of this pristine, alpine country.
In Valais
In this Swiss canton 3, 500 feet above sea level, women wear pants, tend herds, cut hay, and clamber up and down the steep mountains.
Deer Farming in the United States
This article presents the idea that rising prices of beef and mutton can be partially offset by raising deer and elk – – animals that in many parts of the country can be produced more cheaply and with less labor than traditional livestock.
A New National Park
The United States owes it to future generations, the author says, to designate Glacier National Park in northern Montana.

Be the first to review “National Geographic March 1910” Cancel reply 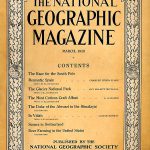