We make them. We depend on them. We’re filling the ocean with them. Beyond what we’ve incinerated or recycled, a staggering 5.5 billion tons remain, taking centuries, or more, to break down. Can we enjoy this miracle material and have a clean environment too?

Parrots may be too popular for their own good.

A Refuge at Risk

The stakes are high if oil exploration comes to the Arctic National Wildlife Refuge.

What happened on Roanoke Island?

In a nation that doesn’t emphasize individuality, portraits of ordinary citizens may look like propaganda. Viewed as a group, they’re unsettling.

To Conserve or Hog Resources

If society depended on it, would you share – or would you be selfish?

Engineer Arthur Huang is finding new uses for garbage – and revolutionizing recycling in the process.

They were studying marine life – at closer range than planned.

In a Canadian forest fungi and trees have developed a hidden intelligence.

Be the first to review “National Geographic June 2018” Cancel reply 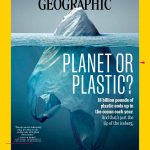